I’m so happy to announce the new Janelle Wesson and Simon Sloan’s story.

As you may know (or maybe not), there are five books planned for this series (three more to go), and then I’ll return to Miranda and Parker #20.

Well, the Wesson and Sloan books take place during the same time frame as Miranda and Parker #16 through #19, aligning again in book #20.

While Miranda and Parker are hunting for Santana, Wesson and Sloan are tracking down his empire, trying to find out who runs it now and who gave the order to kill Simon’s boss and frame him for the murder. All while running from the man sent to kill them.

You know I hate spoilers, so I can’t tell you much more than that.

Except that I’m working on book #3 now.

Here’s a link to the new series in case you missed the first book. I hope you enjoy these exciting stories!

When they left Buenos Aires, Simon Sloan and Janelle Wesson
were running for their lives.

A man who could be the new leader of Group 141, Donavan Santana’s criminal empire. The man who gave the order to kill Simon’s boss at the FBI and pin the murder on him.

But in Athens, nothing is as it seems, and soon the pair are embroiled in a fight against a deadly drug trafficking operation.

Can they win this battle before the man sent to kill them succeeds
in his mission?

A Miranda and Parker Mystery

One serial killer or two?

Miranda and Parker are finally getting ready to retire for real this time.

Until the brutalized body of a young law school student is found in a park in Midtown, Atlanta.

A body that reminds Miranda of the recent murders in Chicago.

And of the sadistic killer who still haunts her dreams.

She has to stop him before he kills again. Once again, retirement will have to go on hold.

But as she and Parker and the team dig deeper into the case, Miranda discovers chilling clues that tell her these murders are just foreplay.

The killer is really after her.

Listening to the steady rhythm of her Adidas on the pavement, Natalie Griffith jogged along the far side of the loop around Lake Clara Meer in Piedmont Park in Atlanta.

Dew was forming on the nearby grass, and the predawn air in the park was cool, though it was supposed to get into the eighties by noon today.

It was safe here.

Still, the words of her mother’s last text echoed in her head. “Nattie, you have to be careful.”

Her mother had attached a newspaper article about some serial killer on the loose in the city back home. She would have freaked out if she knew Natalie ran in the park by herself at four-thirty every morning.

Bonnie, her ex-roommate, used to come with her. She’d always say the park was spooky at this time of the morning, but Natalie told her she liked the quiet, the solitude. It gave her a chance to think. At least, that’s what she used to say.

No, it was safe here.

As she followed the curve of the trail, Natalie took a moment to check her fitness tracker to make sure her heart rate was as steady as her pace.

Yes. Exactly where it should be.

But then, along the bank of the lake, she heard the trees rustle.

Just the wind, she told herself.

Starting up again, she moved a little faster. Her mother’s text echoing in her head. Maybe she should find a running partner.

She thought of Roger. Maybe she’d ask him to come with her tomorrow. But Natalie didn’t know what to do about him. She liked him. Okay, maybe it was more than just like. But she didn’t have time for him now. Not if she was going to take Aaron’s place.

She gazed up at the nearly full moon and smiled at its beams shining through the dense treetops like a shimmering beacon.

Yes, it was just the wind she’d heard. She wasn’t in any danger. How could she be? It was beautiful here.

But as she passed the bridge that stretched across the lake, she heard the trees rustle again. It’s just the wind, she told herself again stubbornly and focused on her busy schedule for today.

The summer session of law school was harder than she’d thought. Legal writing class required so much work. Torts and Property was kicking her tail. And Civ Pro? She wasn’t sure she could get through it. It was her first class today.

Had she done enough reading? Had she understood the cases the professor had assigned well enough so she wouldn’t be embarrassed when she asked questions? Had she caught the nuances? Professor Cook loved nuances.

She had to get through summer, get an internship, and pass two bar exams as soon as possible.

Her plan, her parents’ plan, was for her to study patent law and join their firm in Chicago. It was what they wanted, what she needed to do to make them proud of her. They’d made it very clear they wanted her to follow in their footsteps and fill her father’s shoes someday.

Then again, after seeing that guest lecturer last week, Natalie was beginning to rethink her future.

His name was Antonio Estavez and he was a top criminal defense attorney in Atlanta. He was hot. With long silky black hair tied back in a ponytail and a heart-stopping face, he oozed the kind of confidence she longed to have. His performance in the courtroom must be dazzling.

Too bad she’d seen a wedding ring on his finger.

Maybe she’d add a criminal justice course to her load in the fall.

She looked down at her wrist.

The loop around the lake was a flat route, but according to her tracker, her heart rate was too fast. It wasn’t just her pace. For some reason she felt jittery again. Had she had too much coffee before she left her apartment?

Slowing down, she passed the willow trees on her right and admired their beauty. She really liked living in Atlanta. The city had a special charm.

She still felt strange. Like someone was watching her.

That was ridiculous. It was dead quiet. The water of the lake beside her was perfectly calm.

She glanced at her tracker. The numbers hadn’t changed, but she saw it was getting late.

She didn’t have time for another circle. She had to get ready for class.

Ignoring her heart rate, she sped up again.

As she passed a hill on her right side, she thought she saw movement. That was silly. No one was in the park now. Was she getting as paranoid as her mother?

Uncomfortable, she glanced over her shoulder. Nobody was there.

Wait. Was that a shadow behind that pine tree up there? She thought it moved. Was someone watching her?

No. She was being paranoid.

But before she could take another step, she heard something whoosh down the hill and leap onto the pavement. And then someone gave her a hard shove from behind.

She stumbled and fell onto the pavement, catching herself with her palms, skinning the flesh. “What do you think you’re doing?”

“Shut up,” growled a frightening voice.

She tried to get up.

Suddenly there was a bright light that seemed to flood the whole world. He was in front of her now, shining something in her face.

Terrified, she raised an arm to shield her eyes. “Leave me alone. There are police all around here.”

“There’s no one here.” He grabbed her wrist and pulled her to her feet.

Somehow she managed to break away from him. She started to run, but she could barely see after that light in her eyes.

He rushed up behind her and grabbed her again, holding her around the waist so tight, she could barely breathe.

“Stop it,” she said as loudly as she could.

Before she could catch her breath and cry out for help, she felt something cold on her neck. And then a sting.

A knife. He had a knife to her throat.

She felt a trickle of blood and began to tremble all over.

“See? You made me cut you. Now be quiet, or I’ll have to kill you right here.”

A ferocious fear engulfed her. She thought she might pass out from it. “No, don’t do that. I’ll be quiet.”

“Take off that tracker.”

“That fitness tracker. Take it off.”

Was he robbing her? She reached for the band on her wrist, but her fingers were trembling so hard, she could barely open the clasp.

“I’m trying.” Finally she got it loose and held it out to him. “Here.”

“Throw it in the grass.”

“What?” He wasn’t robbing her?

“You heard me. Do it.” He squeezed her tighter.

She tossed the tracker across the pavement and it landed somewhere on the lawn.

“My cell phone?” Now she understood. He didn’t want to be traced.

“Are you deaf?” He was getting really agitated.

He pressed the knife harder against her neck, forcing her to raise her chin to keep from getting cut again.

“Okay, okay.” She reached into her pocket, pulled out her phone, and tossed it on the grass. She thought of the last text her mother had sent her. Why hadn’t she listened?

“Alright. Now we’re going for a little walk.” He tightened his grip around her waist and ushered her onto the grass and under the trees.

“Where are we going?”

“That will be nice,” she said, trying to humor him.

But as she stumbled over the ground, and they moved farther and farther away from the lake, she had a feeling she wasn’t going to like this at all.

Could she get away from this crazy man?

With a sinking feeling, she realized that probably wasn’t going to happen. Her heart racing, hot tears rolling down her cheeks, she didn’t dare think about what would.

I’m so excited to announce Vanishing Act (A Miranda and Parker Mystery) #13 is now available in Amazon’s Kindle Unlimited program.

I’m thrilled to share this riveting story with my wonderful KU readers. Links and details are below.

A Miranda and Parker Mystery #13

Five thousand miles away from Atlanta.

A young man is killed.

A young man with secrets.

When Parker’s father asks him to travel to Ukraine to find someone who’s been missing over a decade, Parker flatly refuses. But Miranda can’t say no to Mr. P.

And so they board the plane.

After a long flight and a futile search, they are about to give up. Until they rouse the ire of a very dangerous group. People with secrets. People who will kill to keep them. People who now want Parker and Miranda dead.

You’ll want to read this next adventure, because secrets are about to be revealed. 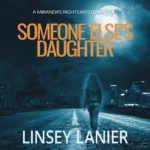 Learn about Miranda’s troubled past and more!

Note: If your favorite book distributor isn’t listed, navigate to the site and enter “Linsey Lanier” in the search box.