Every nerve tight, Miranda scanned the streets as they swung through the traffic around Lenox then onto GA-141. Changing lanes several times, they zoomed through the cars and the tangle of tunnels and twisty asphalt with creatively shaped high-rises looming on every jagged corner. They passed a bistro Parker had taken her to once, a high end shopping area, rows of sweeping glass-and-steel towers housing offices, high-end hotels, and pricey restaurants.

At last, near a gourmet eatery shaped like a glass spaceship, she spotted the commotion.

A snarled mass of cars blocked a gated parking entrance. A line of police were trying to keep nosy pedestrians and TV camera crews at bay, while more cops cordoned off the sidewalk with crime scene tape. Uniforms were everywhere.

With a loud screech, Parker pulled the Lamborghini along the curb. They retrieved their weapons from the glove compartment and hopped out.

A jangle of shouts and groans from the pedestrians, the cops, and the reporters greeted her ears. The smell of charbroiled steak in her nose and the cool autumn wind whistling through her hair, Miranda raced up the walkway with Parker, pushing her way through the crowd.

Up ahead she saw a row of police cruisers parked crossway on a brick-lined sidewalk, about fifty feet away from the gleaming glass entrance of South Exchange Bank.

She recognized the man in charge, Lieutenant Hosea Erskine, who was leaning over the hood of one of the cars, commanding his people.

Off to the side a SWAT truck sat, lights flashing. Several members of the team were cautiously moving in. Dressed in army green, complete with vests, goggles, helmets, and submachine guns, they took cover behind the cylindrical concrete columns that decorated the entrance and waited for instruction.

“Easy,” Erskine said through his radio. “Slow. Nice and slow. Hold your positions. Don’t let the suspect see you.”

Back from the team, creeping along the concrete wall of the next building, someone with a TV camera appeared.

“Get those news people out of here,” Erskine barked to one of his men. “Don’t they know there are lives at stake?”

Two uniforms hurried off to take care of the report.

“Hosea,” Parker murmured as he reached the Lieutenant.

Erskine turned to glance at Parker. He looked at Miranda, his dark marble eyes boring into her the way they did during her initial encounter with him when she’d first come to Atlanta.

That was different. But Erskine had acted differently toward her ever since the incident in Jasper County a month and a half ago. And he and Parker had a love-hate relationship that went way back. She was glad he was being sociable right now.

“Where’s Chambers?” Miranda asked. She assumed the officer who was now a sergeant and tentatively an ally of hers would have been called to this scene.

She wondered if he’d be sorry to miss all the hubbub.

“Grab a vest and join in the fun,” the Lieutenant told them.

An officer handed Parker and Miranda Kevlar vests, and they pulled them on.

Erskine shook his head. “Don’t know much. There’s a shooter and a lot of hostages. A bank clerk was shot. The shooter let someone look at the clerk, and the hostage set off the alarm to call us. We don’t know the clerk’s status or if there was retaliation. We haven’t made contact yet.”

Someone had been shot? Not good. They could be bleeding to death in there.

A dispatcher squawked through the speaker in the car, reporting the position of various units.

Suddenly a shot rang out from inside the bank. It hit the glass about twenty feet up, making a huge spider web. But the glass didn’t break. It was blast resistant. Still, Miranda could hear the muffled screams of the people inside. Her heart went out to them. They had to do something.

He was right. If the robber saw police coming through the front door, there’d be carnage.

One of the SWAT officers scurried behind a column closer to the entrance and peered inside. “I have eyes on the shooter. Female. Blonde. Red top, jeans.”

Miranda watched the beads of sweat forming on Erskine’s forehead. “You have that screen ready?” he barked to an officer working with an electronic device.

As if he needed someone to talk to, Erskine turned to Parker. “We’ve got executives and staff stranded on the second floor. Luckily, an IT guy is one of them. He’s trying to hook up a feed to the video cameras on the bank floor.”

She thought so, too.

“I think we’ve got it, sir.” The police tech held up the tablet and dark grainy shadows appeared.

Someone handed Erskine a megaphone.

He took it and spoke loudly through the mouthpiece. “This is Lieutenant Hosea Erskine of the Atlanta Police. You don’t have to do this. We want to help you. What is it you want?”

There was no response. All around was silence.

“Tell me what you want. You can call my cell.” Erskine gave the number.

The tech did something to the tablet and the picture cleared.

Miranda could see the woman now with her red top and jeans. She looked to be in her early thirties. Her hair was highlighted and styled in a breezy shoulder-length cut that gave her a Jennifer Aniston look.

She stood near an empty counter. At her feet sat a crowd of people—the customers who had been in the bank when she’d gone ballistic. A man with long hair in a suit. A couple clinging to each other’s hands. A young woman who looked lost and afraid. A bunch more. Maybe two dozen or more. This was bad.

The woman held a small handgun out with both hands, sweeping it back and forth. She looked scared, unsure of herself. No telling what she might do.

Someone from the floor handed her a cell phone. Erskine’s started to ring. He answered it.

“Hello,” he said with a gentleness Miranda didn’t know he possessed.

The woman’s voice came through Erskine’s cell speaker. “Are you a cop?” She sounded nervous. Really nervous.

“I’m a police lieutenant, yes. What is it you want?”

“I want to talk to my husband.”

Husband? Was this a domestic thing?

“And who would that be?” Erskine asked.

Suddenly there were people closing in behind them.

“I told you, sir,” Miranda heard someone say behind her. “I can’t let you in here. You’re going to have to leave.”

She turned her head in time to see her lanky colleague limping up the walkway, a female police officer snatching at his arm. He’d lost his cane, but his leg still bothered him from an injury he’d gotten on a case a few weeks ago—when he’d disobeyed her orders.

Dressed in his usual monochrome look, Holloway’s tan jacket and tie were blowing in the wind and his short brown hair was sticking straight up. His face was filled with alarm.

Anger bubbled up inside her. “What are you doing here, Holloway?” she hissed at him. “You know this is a touchy situation. If you set off the robber, your ex could be killed.”

Too late Erskine had already turned around. His eyes were on fire, he spoke under his breath. “What the hell is going on, officer?”

“This gentleman says he’s with the Parker Agency.”

Holloway ignored what Miranda had told him and stepped toward Erskine. He took one look at the image on the tablet and his face went pale.

“What?” Miranda said. “I thought you said she was a hostage.”

Parker took his employee by the arm. “Explain yourself, Detective.”

Holloway pointed at the tablet. “I don’t know what’s going on, but that’s her. The one holding the gun. That’s my ex-wife, Audrey.” 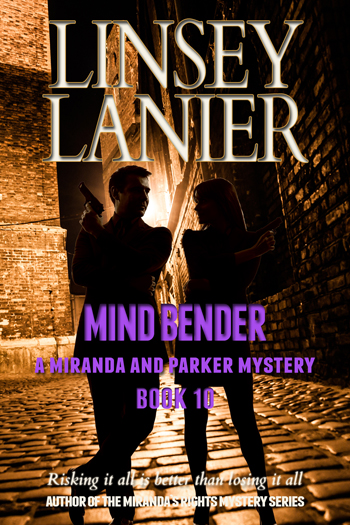 A shooting. A bank robbery. A car chase. A kidnapping. And that was just PI Miranda Steele’s morning.

After a relaxing vacation in the North Georgia Mountains with her sexy husband and boss, Miranda Steele gets mixed up in a bank robbery that leads to a desperate hunt for a missing woman. Never in her life would she have guessed it would be that woman, but she can’t give up now. The woman’s life may be in danger, as well as the trust of Miranda’s new team at the Parker Investigative Agency.

On a twisted trail of violence, kidnapping, and mind control, Miranda is forced to face a frightening question: Can someone brainwash you to do something that’s not in your nature? Like rob a bank and kill everyone in your way?

Miranda and Parker are about to find out.